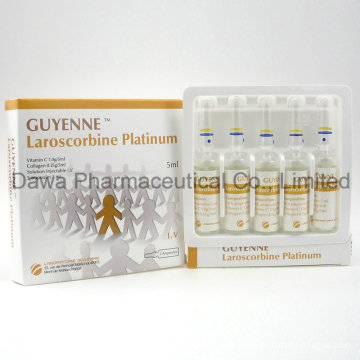 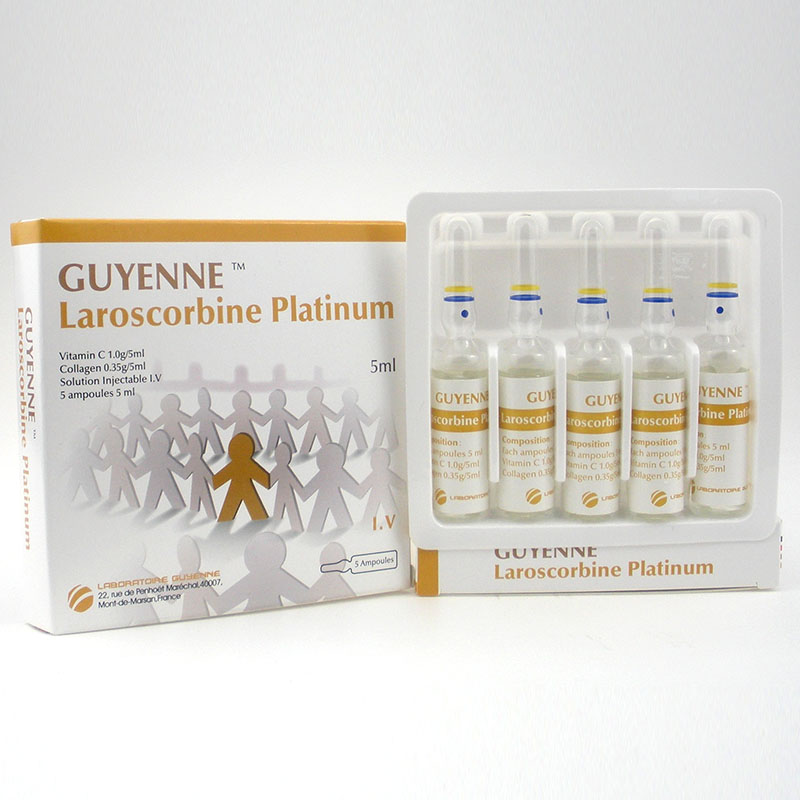 DescriptionVitamin C or L-Ascorbic Acid, or simply ascorbate (the anion of ascorbic acid), is an essential nutrient for humans and certain other animal species. Vitamin C describes several vitamers that have vitamin C activity in animals, including ascorbic acid and its salts, and some oxidized forms of the molecule like dehydroascorbic acid. Ascorbate and ascorbic acid are both naturally present in the body when either of these is introduced into cells, since the forms interconvert according to pH. Vitamin C is a cofactor in at least eight enzymatic reactions, including several collagen synthesis reactions that, when dysfunctional, cause the most severe symptoms of scurvy.[1] In animals, these reactions are especially important in wound-healing and in preventing bleeding from capillaries. Ascorbate may also act as an antioxidant, protecting against oxidative stress. Ascorbate (the anion of ascorbic acid) is required for a range of essential metabolic reactions in all animals and plants. It is made internally by almost all organisms; the main exceptions are most bats, all guinea pigs, capybaras, and the Haplorrhini (one of the two major primate suborders, consisting of tarsiers, monkeys, and humans and other apes). Ascorbate is also not synthesized by some species of birds and fish. All species that do not synthesize ascorbate require it in the diet. Deficiency in this vitamin causes the disease scurvy in humans. Ascorbic acid is also widely used as a food additive, to prevent oxidation. VitamersThe name 'vitamin C' always refers to the L-enantiomer of ascorbic acid and its oxidized forms. The opposite D-enantiomer called D-ascorbate has equal antioxidant power, but is not found in nature, and has no physiological significance. When D-ascorbate is synthesized and given to animals that require vitamin C in their diets, it has been found to have far less vitamin activity than the L-enantiomer. Therefore, unless written otherwise, "ascorbate" and "ascorbic acid" refer in the nutritional literature to L-ascorbate and L-ascorbic acid, respectively. This notation will be followed in this article. Similarly, their oxidized derivatives (dehydroascorbate, etc., see below) are all L-enantiomers, and also need not be written with full stereochemical notation here. Ascorbic acid is a weak sugar acid structurally related to glucose. In biological systems, ascorbic acid can be found only at low pH, but in neutral solutions above pH 5 is predominantly found in the ionized form, ascorbate. All of these molecules have vitamin C activity, therefore, and are used synonymously with vitamin C, unless otherwise specified. 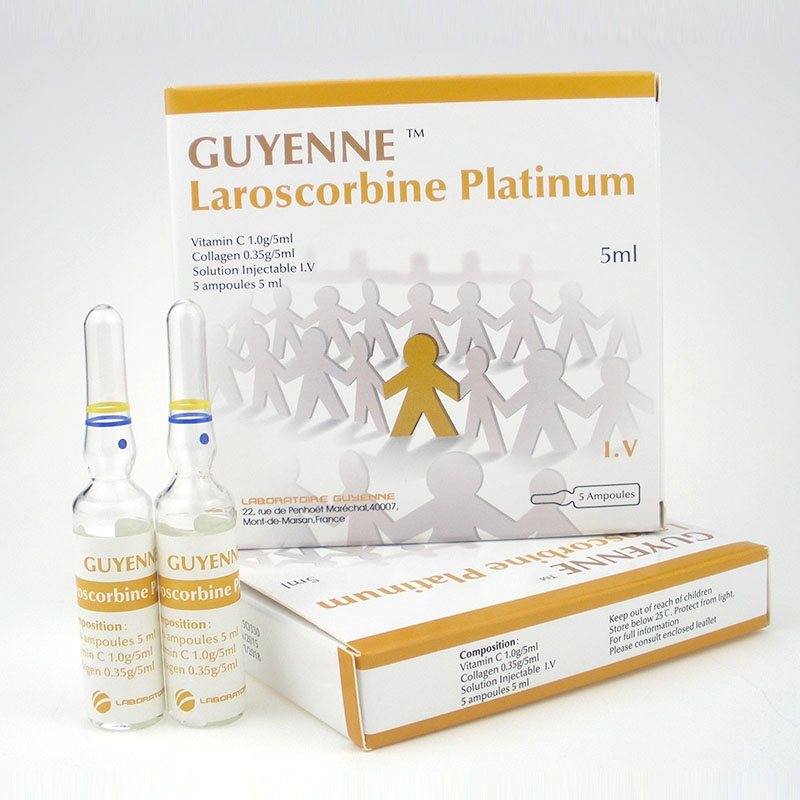 Biological significanceThe biological role of ascorbate is to act as a reducing agent, donating electrons to various enzymatic and a few non-enzymatic reactions. The one- and two-electron oxidized forms of vitamin C, semidehydroascorbic acid and dehydroascorbic acid, respectively, can be reduced in the body by glutathione and NADPH-dependent enzymatic mechanisms. The presence of glutathione in cells and extracellular fluids helps maintain ascorbate in a reduced state.

BiosynthesisThe vast majority of animals and plants are able to synthesize vitamin C, through a sequence of enzyme-driven steps, which convert monosaccharides to vitamin C. In plants, this is accomplished through the conversion of mannose or galactose to ascorbic acid. In some animals, glucose needed to produce ascorbate in the liver (in mammals and perching birds) is extracted from glycogen; ascorbate synthesis is a glycogenolysis-dependent process. In reptiles and birds the biosynthesis is carried out in the kidneys. Among the animals that have lost the ability to synthesize vitamin C are simians and tarsiers, which together make up one of two major primate suborders, Haplorrhini. This group includes humans. The other more primitive primates (Strepsirrhini) have the ability to make vitamin C. Synthesis does not occur in a number of species (perhaps all species) in the small rodent family Caviidae that includes guinea pigs and capybaras, but occurs in other rodents (rats and mice do not need vitamin C in their diet, for example). A number of species of passerine birds also do not synthesize, but not all of them, and those that do not are not clearly related; there is a theory that the ability was lost separately a number of times in birds.[11] In particular, the ability to synthesize vitamin C is presumed to have been lost and then later re-acquired in at least two cases.[12] All tested families of bats (Order Chiroptera), including major insect and fruit-eating bat families, cannot synthesize vitamin C. A trace of gulonolactone oxidase (GULO) was detected in only 1 of 34 bat species tested, across the range of 6 families of bats tested. However, recent results show that there are at least two species of bats, frugivorous bat (Rousettus leschenaultii) and insectivorous bat (Hipposideros armiger), that retain their ability of vitamin C production.[14][15] The ability to synthesize vitamin C has also been lost in teleost fish. These animals all lack the L-gulonolactone oxidase (GULO) enzyme, which is required in the last step of vitamin C synthesis, because they have a differing non-synthesizing gene for the enzyme (Pseudogene ΨGULO). A similar non-functional gene is present in the genome of the guinea pigs and in primates, including humans. Some of these species (including humans) are able to make do with the lower levels available from their diets by recycling oxidised vitamin C. Most simians consume the vitamin in amounts 10 to 20 times higher than that recommended by governments for humans.[20] This discrepancy constitutes much of the basis of the controversy on current recommended dietary allowances. It is countered by arguments that humans are very good at conserving dietary vitamin C, and are able to maintain blood levels of vitamin C comparable with other simians, on a far smaller dietary intake. Like plants and animals, some microorganisms such as the yeast Saccharomyces cerevisiae have been shown to be able to synthesize vitamin C from simple sugars EvolutionAscorbic acid or vitamin C is a common enzymatic cofactor in mammals used in the synthesis of collagen. Ascorbate is a powerful reducing agent capable of rapidly scavenging a number of reactive oxygen species (ROS). Freshwater teleost fishes also require dietary vitamin C in their diet or they will get scurvy. The most widely recognized symptoms of vitamin C deficiency in fishes are scoliosis, lordosis and dark skin coloration. Freshwater salmonids also show impaired collagen formation, internal/fin hemorrhage, spinal curvature and increased mortality. If these fishes are housed in seawater with algae and phytoplankton, then vitamin supplementation seems to be less important, it is presumed because of the availability of other, more ancient, antioxidants in natural marine environment. Some scientists have suggested that loss of the vitamin C biosynthesis pathway may have played a role in rapid evolutionary changes, leading to hominids and the emergence of human beings. However, another theory is that the loss of ability to make vitamin C in simians may have occurred much farther back in evolutionary history than the emergence of humans or even apes, since it evidently occurred soon after the appearance of the first primates, yet sometime after the split of early primates into the two major suborders Haplorrhini (which cannot make vitamin C) and its sister suborder of non-tarsier prosimians, the Strepsirrhini ("wet-nosed" primates), which retained the ability to make vitamin C.According to molecular clock dating, these two suborder primate branches parted ways about 63 to 60 Mya. Approximately three to five million years later (58 Mya), only a short time afterward from an evolutionary perspective, the infraorder Tarsiiformes, whose only remaining family is that of the tarsier (Tarsiidae), branched off from the other haplorrhines.[30][31] Since tarsiers also cannot make vitamin C, this implies the mutation had already occurred, and thus must have occurred between these two marker points (63 to 58 Mya). It has been noted that the loss of the ability to synthesize ascorbate strikingly parallels the inability to break down uric acid, also a characteristic of primates. Uric acid and ascorbate are both strong reducing agents. This has led to the suggestion that, in higher primates, uric acid has taken over some of the functions of ascorbate.

Contact us if you need more details on Ascorbate. We are ready to answer your questions on packaging, logistics, certification or any other aspects about Collagen、Whitening/Lightening. If these products fail to match your need, please contact us and we would like to provide relevant information.